We are #RowanPROUD and we are Rowan Profs! Not exactly sure what a Prof is? It’s our owl mascot, Whoo RU. Read about him here. Our series of alumni spotlight blogs feature Profs who have stayed connected to the Rowan community after graduation. Here we speak with 1992 graduate Mike Jenkins, who now owns Anchor Moving & Storage.

Mike Jenkins always wanted to start his own business, but couldn’t have known as a college student that his summer job in the moving industry would one day become a base for his decision to purchase his own company. “During college, my summer job was moving families, loading and packing. And after graduation [the moving company I worked for] gave me a sales position which I did for 16 to 17 years,” shares Mike Jenkins about the beginning of his career. A 1992 Rowan graduate, in 2010 Mike bought and became president of Anchor Moving & Storage, a Moorestown-based company that has handled family and business moving and storage needs for over 40 years. Mike says that Anchor is “small enough to care, while big enough to get the job done.” 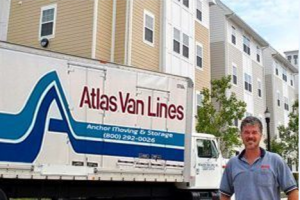 Majoring in small business management while at Rowan (then Glassboro State College) prepared Mike academically and mentally for starting his own business. He met his long-term friends at Rowan, with whom he now occasionally goes golfing or meets up with at their kids’ birthday parties. He even met his future wife, Maggie, here at Rowan. Mike was a member of Kappa Sigma fraternity, which has morphed into today’s Pi Kappa Alpha, while Maggie was a member of Alpha Delta Epsilon sorority, which is now Theta Phi Alpha. Today, their daughter Cassidy is a sophomore at Rowan. She likes to be close to home and decided that following in her parents’ footsteps as a Rowan Prof is the best choice for her. 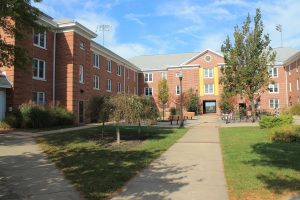 Several years ago, to meet the needs of the growing demand for on-campus University housing Rowan decided on a short-term plan to place three students in every dorm room, instead of two. In just one month of hard work in the summer heat, Anchor placed an additional bed and dresser in over 700 residence hall rooms. But that is not the only project Anchor has completed for Rowan. Anchor’s team moved furniture into a couple of Rowan Boulevard wings, as well as helped with renovations in Robinson Hall. And in winter 2013, Anchor relocated Rowan’s Engineering and Facilities Department from Linden Hall to Shpeen Hall which now holds the Alumni Engagement Office. Harsh weather conditions didn’t prevent Anchor’s team from coming up with a creative decisions to place “slides” (masonite sheets) on the stairs to load and unload three full trucks at a time.

“The growth [of Rowan] is impressive. It doesn’t feel like the years have passed the way they have. It seems like I still should be taking classes here,” says Mike, calling himself Rowan Proud. Every time the University needs something moved they call Anchor. The company works closely with the University, and even offers moving discounts to the Rowan community for local and long distance moves. (For more information email info@MoveWithAnchor.com.)

Managing a fast-growing company of 45 to 50 employees is not an easy task, but Mike feels that Rowan helped to build the foundation of his career, preparing him for where he is today. From overseeing daily tasks, accounting and even HR, every day is different. But hard work pays off, as the company is planning to expand into another office in Philadelphia. Mike intends to purchase another moving company that is for sale now, so that the two companies can merge resources. Thus, Anchor will see a lot of growth in the near future.