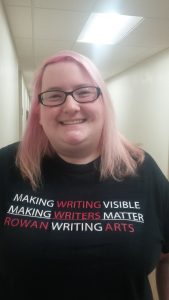 is undergoing her senior year as an undergrad while concurrently taking her first year of graduate courses. She is focusing on a dual-specialization in creative writing and new media and publishing within her bachelor’s degree. She earned her associate degree in English at Camden County College before transferring to Rowan. Emily heard about the 4+1  program during a Writing Arts Club meeting last year and decided it was the perfect program for her. She knew that she wanted a master’s degree, and says this was,“the best way to get a leg up with a master’s degree, and the most cost efficient way to go about getting one.”

“It may be a bit more work than I expected,” Emily explains, “especially since Core II is way more research-based than I anticipated. Graduate courses expect more work from you as well as a higher quality compared to undergraduate work.”

Even with the heavy workload of the program Emily still makes time for her extracurricular activities like the Writing Arts Club, where she is an executive board member, and being a part of Round Robin Writes. 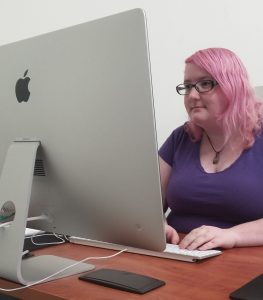 Emily is glad she signed up for the heavy workload and responsibilities that came along with the 4+1 program. “I do like being in the program,” says Emily, “and now I’m partially prepared to start on my master’s project, which is something I was warned about before I joined the program. I’m in this program with a couple friends of mine, so we’ll be taking a lot of these graduate classes together; I think they’re pretty neat.”

The 4+1 program may not be for everyone but the payout is worth it in the end. A lot of hard work and dedication to the program is required so you have to be self-motivated and willing to put the effort in.

“I think the only thing I can say to prospective 4+1 students is how much work is involved. I’ve heard stories of people who’ve taken the program complain about the workload, but that’s what’s expected from them. There’s a lot of work, and you have to push through it. It’s a matter of dedication, and if you’re not dedicated and willing to work, the 4+1 program probably isn’t for you.”

The 4+1 Writing Arts program  Rowan University allows undergraduate writing arts majors to earn both their bachelor’s and master’s degrees in an accelerated timeframe. During a student’s senior year as an undergraduate, he or she takes graduate courses, and then finishes the graduate courses within the following year. For example, students can receive their bachelor’s degree in Writing Arts and then their master’s degree in Writing in just five years total instead of the traditional six years, as the graduate program is typically two years long. Another bonus: during your senior year as an undergraduate, you are still paying the undergraduate tuition rates for the graduate classes during that year.