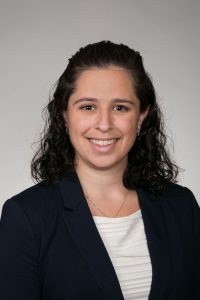 Ashley is a leader in the osteopathic medical student community and represents students’ voices across different platforms. She currently serves as RowanSOM’s Student Council President, advocating for student well-being with the Mental Health Awareness Project.

Additionally, Ashley is a delegate to the New Jersey Association of Osteopathic Physicians and Surgeons, and has spoken about the future of osteopathic medicine at the American Osteopathic Association (AOA) House of Delegates.

She also serves as the National 1st Vice Chair of the American Association of Colleges of Osteopathic Medicine’s Council of Osteopathic Student Government Presidents.

Ashley balances her final year at RowanSOM with her commitment as a 2nd Lieutenant in the United States Air Force and achieves excellence in both endeavors.

We are so proud to have her as one of our own!