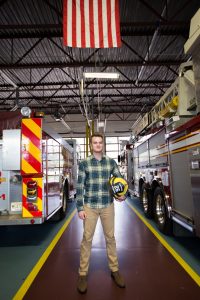 “I love science, but I always felt like I wasn’t that traditional student. I love what I’m doing in engineering, but I don’t want to be sitting in a cubicle working all day long for my life. I want to do something more than that, especially while I’m young. Being a firefighter is a supplement to my degree, sharpening my people skills,” says Jacob Mahon. “Communicating with the people of Glassboro on possibly one of the worst days of their lives provides me with one-on-one people skills that can’t be taught in the classroom.”

Jacob, a rising junior mechanical engineering student from Williamstown (Gloucester County), always felt the need to do more with his skills and education. He wanted to give back to the college and town community, and with the Glassboro Fire Department, he does just that.

As a bunk-in volunteer firefighter, Jake responds to medical calls and fire alarms along with the Glassboro fire department teams. To achieve this position, he completed a six-month long fire academy in Gloucester County, but can now work as a firefighter anywhere in New Jersey. The passion for serving and giving back to his communities has always lived within Jake, as he was in ROTC for two years prior to attending the academy.

At the Fire House right on High Street, Jake stays over night two to three nights a week. The other nights, he sleeps in his apartment in the Whitney Center. 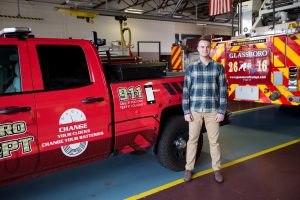 “I love every second at the fire house,” he says. When I asked Jake about his free time and how he balances a full schedule with living and working at the fire department, he responded, “I work weekends so it doesn’t interfere with my week day classes. But I look at those days as my days off honestly, because I do really love being at the fire house with all of the people. Every weekend is a little different and it’s so rewarding.” 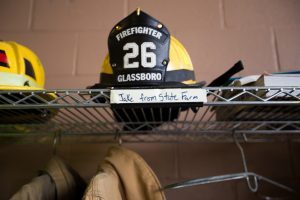 There was such enthusiasm in Jake’s voice when he talked about what he did. It’s the new young volunteer firefighters that are running into the fire to personally protect us. Jake told me when you graduate the fire academy, you are placed on the Engine Crew, going into fires with the hose to put them out. The next promotion is being placed on the Truck Crew, throwing ladders and handling the massive hose. And the most experienced firefighters are a part of the Rescue Crew. I was shocked to find out the newest members are the ones running straight into the action, but Jake responded with, “I was relaxed for my first fire. They completely supply you with the training necessary. But in the moment, I didn’t even have time to feel uncomfortable, you just go in and do it, and react later.” He’s been to three real fires so far during his career

Experiencing these moments has made Jake feel incredibly comfortable under pressure. He explained how this training and work supplements his engineering career, being that he will have to handle large groups of people and communicate goals and plans. The fire department enables Jake to do all of this with ease. 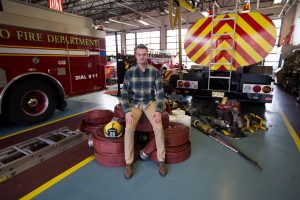 “Now, I’m still trying to find my place. I definitely want to do something related to mechanical engineering, but right now, I’m hoping I can go to an army officer academy school after graduation and fly helicopters for the army.”

Getting involved outside of the classroom has not only exposed Jake to another career path he wishes to take, but gave him a second home with new friends that are his family now.

Beyond the Classroom highlights Rowan University-related experiences outside of traditional classroom learning that complement and support students’ career aspirations during this pre-professional phase in their lives.