What first surprised you about Rowan?
“I think how nice everyone is, because they say that northerners aren’t always the nicest. It’s a stereotype, but that’s not true. Everyone, especially within the Theatre and Dance Department, has been really sweet and encouraging.” 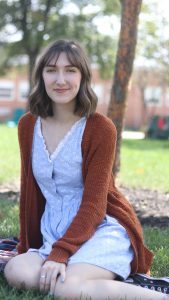 How is New Jersey different from Mississippi?
“Everybody here is very into what they are doing. It’s a very dedicated space for theatre. In high school, there are so many people that do theatre who are just doing it for the credit, and now it’s so nice to be surrounded by people who are just as passionate about theatre as I am. Students care so much.

“I guess there’s an energy that’s different, where everyone’s got something to do.
Whereas in the south, everyone’s kind of like content with living in their hometown forever and staying put. I feel like up north there’s kind of a ‘go-getter attitude,’ where everyone’s like ‘Let me go make a career for myself’ or ‘Let me shape my own path.’ Yeah, it is more fast-paced, and it’s very refreshing.

“Also, my teachers are more chill and laid back. There is a respect thing — where it could just be like a college thing or a north vs. south kind of thing. But it’s like the teachers understand that we’re people, and it’s not like ‘I’m your elder, so you have to respect me.’ Oh, and people don’t say ‘yes, m’am’ or ‘yes, sir.’ It’s such a weird feeling because I’m so used to saying those things.

“In the south, there’s an expectation for younger generations to speak that way to older generations. But here, there’s just a general respect for everyone. And Rowan is very progressive, so it made me super happy to see that people were using pronouns to introduce themselves and address each other. It just felt new and right.”