Today we feature Colin Cox, a Rowan Global alumnus with both bachelor’s and master’s degrees in Finance from the Rohrer College of Business. Colin, from Camden County, is a Corporal in the Army National Guard. When not on duty, he works as a proposal analyst for Lockheed Martin. Learn more about how Colin navigates his military and civilian positions — and how he says Rowan brought out his true passion for finance.

Recent M.S. in Finance graduate Colin Cox couldn’t attend his commencement ceremony this summer for a good reason — he was serving his country.

Colin, a Corporal in the Army National Guard, had been on a one-month special assignment as a crew chief aboard a Black Hawk helicoptor in California.

Since he enrolled at Rowan’s Rohrer College of Business in 2016, the Camden County native frequently found himself balancing his military responsibilities and academics … often at the same time. But since earning his degrees, Colin has mapped out new plans that leverage his military discipline and skills toward a bright future in finance.

Since eighth grade, Colin had always envisioned his career path as an Army pilot, circling around a college experience. He enrolled in junior ROTC in high school. After graduation, he joined the New Jersey National Guard, leaving for basic training in South Carolina and then advanced individual training in Virginia, where he learned how to be a UH-60 (or “Black Hawk”) helicopter mechanic.

When he returned home, Colin admits he had little interest in attending college. With a bit of prodding from his family and friends, several of whom were attending Rowan, he hesitantly gave it a shot. He applied as an undergraduate to the College of Business, and his course changed from there.

“When I started Rowan, I loved it. And that kind of changed my career path, kind of wanting to follow the military [path for] 20 years to actually wanting to get into finance,” he says.

Colin completed his undergraduate degree in three years while still serving in the military. “I ended up loving finance. It’s so much fun. I love the professors and I loved the degree program itself,” he says.

The same week he graduated with his bachelor’s degree, Colin began the M.S. in Finance program. With the master’s degree, he wanted to hone his finance skills and, if he were to seek leadership roles down the line, pursue a broader MBA degree long-term.

The fully-online program also appealed to Colin, who was working full-time and in the military and structured his classes around both to complete the graduate degree. He explains: “You can’t put it all off, but it gives you the flexibility to do it on your time whether it’s early morning, late at night or in the middle of the day.”

Colin speaks highly of the College of Business’s many mentorship programs and networking events, where at such gatherings he met two alumni who helped forge his future business career. He says one alumnus helped him decide to apply for the M.S. in Finance program. Another connected him with Lockheed Martin; the defense contractor hired Colin as a proposal analyst soon after he graduated with his bachelor’s degree.

In this role, Colin is part of a team which, working with engineers and supply chain personnel, develops pricing and estimating strategies for government defense projects. It’s here that his Army background circles back again.

“Sometimes it’s a missile defense system, and you get to meet the engineers on all these things I got to use in the military. I got to experience some of this stuff, I got to be the customer. And now I’m delivering the product. So it’s fulfilling. It’s kind of like rounding out the military experience,” he says.

Colin has logged more than 222 flight hours in his Army career. According to him, being aircrew onboard the aircraft demands more training than a typical member of the Reserves. On active duty in California last summer, he says his special assignment’s purpose was to give commanders experience leading troops into battle without the consequences of real combat. 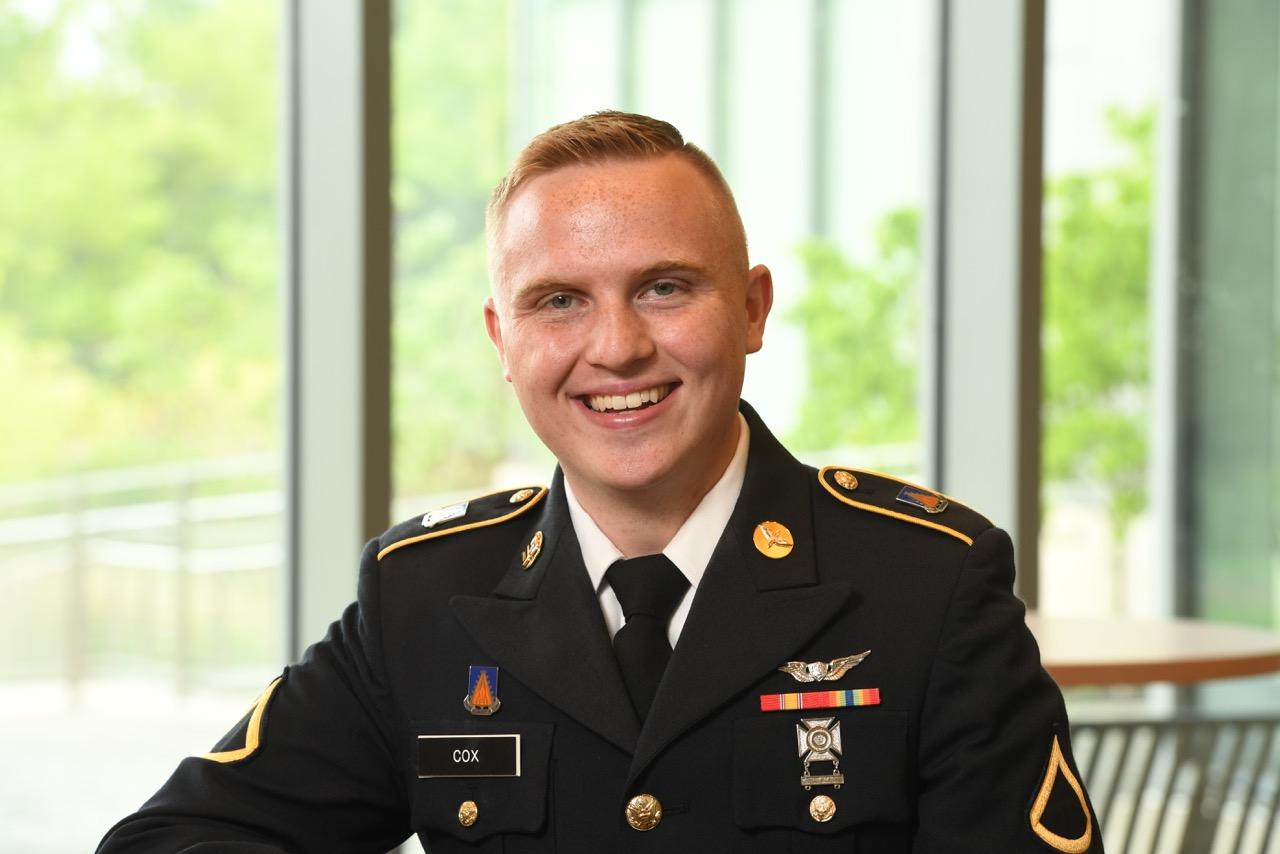 Colin’s military contract expires in early 2021, and he says he will not renew it nor train after that date with the Army reserves. He explains: “As you get into your career in the military, you take on more responsibility —and then the same thing on the civilian side. So I would just be nervous about trying to do both and not excelling at either.”

Colin says Rowan changed his mind about the corporate world — he calls his position with Lockheed Martin his “dream job” and is poised to climb the company’s ranks. He’s returned to Rowan as an active alumnus, working alongside current and former Rohrer College of Business graduate students as a founding member of the Rohrer Graduate Student and Alumni Advisory Board, which aims to enhance the student and alumni experience by hosting networking events, seminars and industry nights.