I am Tyler “TJ” Jacobs, my pronouns are he/him/his, and I am a gay man.

What is your year in school and your major?

I am a junior Theatre major at Rowan University.
When did you come out as LGBTQ+, and why then?

[laughs] Ok, this is actually a really funny story. So there is never a right time for anything. I actually came out twice, and the first time was of my own accord. I was in 8th grade, and I had attended an open house at my sister’s elementary school with my family and my sister. My sister’s school had one of those “cafetoriums” where there’s a stage in the cafeteria, and I had gone up on the stage and had done some kind of flourish or something, and my mom was like, “Be careful Tyler, do something like that and people might think that you’re gay.”

My stepdad laughed and said ok, but my mom proceeded to freak out. She pulled every emotional trick to basically force me back into the closet, and that was not great. She had said it would be okay, so I had been like, well, there’s no better time than the present, and it turns out the present was not a great time. Later, sophomore year of high school, I had two of my friends over. My friend, who I had a crush on at the time, and I were cuddling and my mom came in and said “Stop that.” Well, obviously, we didn’t stop, and then she came back and said​ that I needed to come downstairs, while my friends were still in my room, and then had this entire confrontation with me that was forcing me out of the closet. Now everything’s fine, we have a great relationship. My mom doesn’t have a problem with it; she did research on her own to figure out what was going on, and we have a great relationship now. Certainly back then, things were a bit rocky.

Has being LGBTQ impacted or influenced your education?

Not really in any negative way. Generally, I’ve been pretty blessed with being a white cis man, who is also straight-passing, that I haven’t had any backlash. I mean, I’ve been called “fag” only twice in my life, and not so many are that lucky.

Has LGBTQ culture and acceptance changed throughout your time at Rowan?

I’m in the theatre department, so I’m just generally around a large amount of LGBTQ+ people, but I haven’t really felt super connected to a larger community of LGBTQ+ people as a whole at Rowan. I haven’t felt that at all. I haven’t really experienced any hatefulness or anything from the general public, besides being called “fag” once, but that was one time out of three years. Ultimately, it doesn’t feel like there’s a huge presence with any of the LGBTQ+ organizations. I know that they’re there, but I’m never able to attend because of my schedule.

This year I’m really, really trying to reach out and connect to other people in the community because in general LGBTQ+ youth do not get to connect to others in the community throughout their adolescence. I really think we are negatively impacted by that, because we don’t get to relate and share our experiences with others as our straight counterparts do. I’m hoping that the community continues to grow and open up and connect with others on campus, but I haven’t seen any new developments. It’s honestly stagnant. The community at large here is very accepting.

Rowan, like many other institutions, helped me find an inclusive community by providing a space where I could find like-minded individuals. Whether it is in the classroom, at the student center, the library, or the theatre, usually I could find someone to speak to or learn something from. Rowan has also provided me with a wealth of opportunities to build smaller communities within through artistic endeavors, educational experiences, and club formulation. For instance, from my understanding I was the only puppeteer on campus with the exception of the puppetry workshop professor. Seeking to change that, I created RU Puppet Artists (RUPA), which allowed me to create the community I wanted to be a part of. Over a single school year, despite COVID-19, there are now several students that would proudly call themselves puppet artists that I know I can rely upon.

My biggest inspiration is the Department of Theatre & Dance’s Technical Director Tom Fusco. Not only is Tom an incredible professor, he has been an amazing friend and collaborator. He has been there to support myself and many other students throughout all of our endeavors. I know that whenever I need a hand or advice, I can call on him. That is not to say that he is the only professor who has supported me, especially when it comes to the theatre & dance department. There are several of them who I am proud to have worked with and am incredibly grateful for all the support and wisdom that they have imparted upon me. As I approach the end of my undergraduate studies, I can smile at all that I have learned from these incredible people and look forward to continuing my work with them in the larger South Jersey/Philadelphia community so that we can continue to inspire young artists trying to find their voice.

I would like to see a large presence besides rainbow balloons at Pride month. There are drag competitions that happen, but only once a year. Maybe I’m wrong, because I’m not super connected to any of the organizations, but I would generally like to see more outreach and letting people know “Hey we’re here.” Other than me just being aware of the existence of these clubs, I see and hear nothing. That’s really unfortunate because there are a lot of people who could really use a little more messaging and letting them know that they’re there. There’s no connection, there’s no flyer up or anything that’s constantly up in their periphery to remind them that ‘Oh, there are people out there like me on campus who I can connect to and grow with.’ It would be really assuring if there was a general expansion of LGBTQ+ presence to let people know we are here.

​I think it’s really, incredibly important to find people in the community you look up to and can relate to and maybe reach out to. I’m a puppeteer, and the puppeteering community, like most professions, is dominated by straight, cis, white men, but there are queer puppeteers out there, and there are some truly amazing ones. While I haven’t had the privilege of getting to speak with them, just knowing that they exist and being able to see and relate to their work, and to know that they’re approaching it through that [LGBTQ+] lens is a really powerful thing. To know that there are these artists representing gay men in the puppeteering profession is really important to me. They are truly my biggest heroes.

I know for me, I hope I can connect with them so maybe one day I can be that hero where someone looks at my work and says he did it, I can do it, which is a beautiful thing. Find your idols, find your role models, and if you can, let them know that you’re here too. 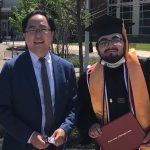 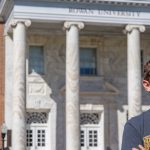