What has the journey been before your time at the Eagle?

Angela took a semester off after graduating in Fall 2017 and spent that time preparing for graduate school. While self producing, teaching, and acting, Angela also invested herself in the world of theatre marketing and PR. Angela began working at the Eagle Theatre in February 2020.

“I had so many different jobs while I was at Rowan. I did singing telegrams, senior home performances, numerous children’s theatre jobs, performing in community theatre, and here we are,” Angela explains. “I would just pick up anything that was flexible. The singing telegrams were things I could do on my own schedule. Same with the senior homes. Then I would do community theatre at night, to make connections with people.”

Once Molly Jo graduated in Spring 2018, she and Angela moved in together. At that time Molly Jo was a lighting designer for Mainstage Center for the Arts. Throughout the rest of that summer, she was also interviewing for various administrative positions and internships. She found herself at People’s Light in Malvern, PA as a general management intern.

Molly Jo says, “They just kept letting me do things.”

This led Molly Jo on her way to being Company Manager for the next two years. In those two years, Molly Jo was self producing her work and light designing shows across high schools in South Jersey. Once Angela secured her own position at the Eagle, she encouraged Molly Jo to keep putting in for job openings.

“Thankfully something was right. Right time, right reason. And here I am,” Molly Jo says.

What are the responsibilities you both have at the Eagle Theatre?

Molly Jo says: “My role is to oversee and collect the different types of programming we are going to do, and brainstorm with the team … then fulfill those visions by collecting the creative teams and hiring. Facilitating meetings, gathering people, and engaging the community.”

Angela shares: “I started in February of 2020 right before everything shut down.” Running a lot of the theatre by herself, Angela used the global intermission as a time to plan for the theatre’s future. She invested herself enough to be promoted from part time to full, which has led her to being responsible for overseeing the box office, marketing and PR, community engagement with the town of Hammonton, NJ, securing business connections, and overseeing all productions.

They both express that community engagement is a huge part of the job, especially in a time where theaters have been dark for over a year. Having an already well-established subscriber base is beneficial, but both Angela and Molly Jo express that they want to make it a priority to build their own connections with the community as new representatives of the theatre.

What projects have you been working on?

Through a partnership with the New Jersey Theatre Alliance Stages Festival, they just finished a staged reading of a production. Prior to this outdoor project, they brainstormed what would get people invested.

“We thought having someone local would be awesome,” Molly Jo says.

The staged reading was of One Day Old written by South Jersey local Iraisa Ann Reilly. Her play tells the true story Operacion Pedro Pan through a dream-like lens, and with allusions to the story of “Peter Pan.” Being the story of Latinx immigration, the script is bilingual and utilizes both Spanish and English language.

“We have a decently large Spanish-speaking community here in Hammonton, so that was very exciting.”

A fully cast staged reading was mounted outside the Eagle on Thursday, May 27 and was well received by the community, specifically by Allies in Caring, a wellness hub that caters to Spanish-speaking communities. Molly Jo points out the importance of the newfound connection with Allies in Caring, as theatre in Spanish is an underserved area in the performance world. Angela and Molly Jo shared that audiences can expect more inclusive productions in the future such as this wonderful experience.

The Eagle Theatre also has their year-round children’s program called The Repertory Company, taught by many artists such as Rowan alumni Charlie Barney (he/him) and Adriana Santilli (she/her). Angela describes it as a “multi-disciplinary conservatory for high school students, where we give them an opportunity to write and perform, sing and act, for well-balanced training.”

“With an acting/theatre focus, it’s meant for students who are really serious about the work.” Though the program is small at the moment, the students get a lot of one-on-one time devoted to their work. In correspondence with a full masked year, the students have had numerous performance opportunities around the Hammonton community. “Having remote learning at school, this has been their one place to come, have fun, and also make friendships.” The summer camp will pick back up at the end of June, and the company will come back together in the fall.

*Mature content: guests must be 18+ and 21+ to purchase and consume alcoholic beverages.

What is your favorite thing about your job?

Right away, Angela says she enjoys “starting on a fresh page.” The feeling of excitement from starting anew is something she enjoys. She also mentions that having all the resources and support is what has helped her and Molly Jo bring in the new culture and vision they wish to create.

“A healthy work environment is something I am proud of,” she adds.

Being freshly graduated from both Rowan and her graduate studies in theatre, Angela feels confident and empowered to bring what she has learned to her work.

Molly Jo lifts up Angela’s feeling of a fresh start, and adds how it feels good to make it a priority to provide a holistic and healthy work environment. She says that light has been brought to many areas in the theatre industry that need changing, and that they are happy to be taking initiative to create “a work environment that is creative and joyful.”

The community is very eager to see more of their work. And sharing more of that work with them is something they cannot wait to do.

From your time at Rowan, what would you say you have applied here at the Eagle?

Angela mentions “the collaborative and ‘make it what you want’ nature at Rowan.” She goes on to mention that the devising courses she has taken in the Rowan University Department of Theatre & Dance have influenced her work at the Eagle Theatre. In those environments she learned the importance of listening to people. Rowan has encouraged Angela to acknowledge and work towards dismantling poor hierarchy in the work place.

“Create a work environment where everyone is a coworker, and try to give everyone a voice,” Angela says.

Angela is also thankful for her internships during her Theatre Management course taught by Professor Lane Savadove (he/him), which was her gateway into development and funding. “I don’t think I would be here without that foundation.” She also thanks Dr. Elisabeth Hostetter (she/her) for encouraging her to study theatre further and run a theatre of her own one day.

Molly Jo then says, “I chose Rowan because I wanted to make theatre happen.”

Rowan has influenced Molly Jo to never put herself in a box. In her time at Rowan, she challenged herself to concentrate in as many studies as she could, such as musical theatre, theatre design and lighting, all while acting and directing. Molly Jo specifically thanks Professor Bob Thorpe (he/him) for giving her, as a director, the ability to also say “and I can do lighting design.” Molly Jo is proud of this and has found great success in this multifaceted mindset.

They both go on to share that they appreciate the support they had from the Rowan University Department of Theatre & Dance community in their time at Rowan, as well as their constant support since graduating.

If you could meet with your college self, what would you tell them?

“Focus on the relationships. Form meaningful relationships with other students and professors. I would tell myself to take what you do seriously, because you can make a serious career out of it,” Angela says.

“I would have just told myself to be louder sooner. By my senior year, I realized this was the exact experience I wanted all along. My relationships were strong and I was letting all my opinions fly. I realized that freshman year I was allowed to do that too,” Molly Jo says.

Angela and Molly Jo were both able to foster their many creative talents at Rowan University, simply by saying “yes” as much as they could. They made opportunities for themselves, they went to work calls, and they maxed out their course load each semester. They credit their artistic successes from putting themselves out there. Having experience working in different areas of theatre has helped them tremendously at the Eagle Theatre. 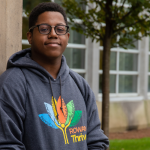