Today we speak with Stephanie Ibe, a 2020 graduate who majored in Biological Sciences with a minor in French and Honors and Pre-med concentrations. Stephanie stayed in Le Havre, France for seven months while working as a teaching assistant through the TAPIF Program. Stephanie comes from Franklin Park, NJ in Somerset County. She was involved in MAPS (Minority Association of Premedical Students), Res Life as an RA/ARD, research, tutoring, RUPAC (Rowan University Philippine American Coalition), Alpha Epsilon Delta (AED – Premed Honors Society), University Chorus, and mentoring through the Dr. Harley E. Flack program.

What is the name of this program?

It’s called TAPIF, which stands for Teaching Assistant Program In France and it’s through the French Ministry of Education. TAPIF was recommended to me by my French teacher, Dr. Maria Hernandez, a former Fulbright Program alumna.

What part of France were you mainly based in?

Normandy! It has a mix of everything. It’s in the northwest of France. You can find suburbs, cities, small towns, beaches, cliffs and the countryside. It’s about two hours away from Paris. You could take a bus to Paris from Normandy for as low as eight euros (about $9). When we traveled to the south of France, we took a train ride from Normandy that took about six hours.

My base city is really special. It’s called Le Havre. It is an urban city with a beach and a port. It is located right next to Sainte-Adresse, where Claude Monet created many of his paintings. What happened in Le Havre is that during the World War II bombings, the entire city was destroyed. The city was rebuilt not too long ago. It was rebuilt by Auguste Perret between 1945 and 1964, so Le Havre looks completely different from other typical French cities. The buildings are a little bit newer and more modern. They are boxier and made of concrete.

How many people again were in your program in France?

According to the website, about 1,100 people participated in it and in my city there were 13 assistants.

How close did you live near each other?

We were all within about 20 minutes of each other, whether by bus, tram or walking. Public transportation is really important in France so we all had our own public transportation card which was pretty affordable. I only had to pay 25 euros a month. It made transportation really easy. Most of us were within the city center, so it was very easy to walk to each other’s apartments.

Could you describe what it was like going from graduation to the pandemic to going to France?

It was such a stressful experience. From the time I graduated to the time I was actually on the plane to France, I didn’t know if I would still be doing the program. We didn’t get our acceptance letters until the end of June, because of Covid delays, and our actual placements until the end of July. And even though we got our acceptance letters, we still weren’t sure if we could leave the country because of the pandemic. The visa center did not open until mid-September. They were not accepting applications to apply for a visa until mid-September, and I had to be in France by mid-October. After I was able to schedule my appointment time for the visa center it took a little bit of time for my visa to process. I got my visa about one week before I had my flight to France.

Even after I got my visa, I had a lot of other things to do before my flight to France. I had to get a background check, my fingerprints scanned, and I had to get my COVID test done 72 hours before boarding. Until I was on the flight, it was stressful, but I made it! Thankfully, it was a lot easier to come back to the US.

What did you do as a teaching assistant?

I taught English and American culture. I taught at two different high schools. One was a hotel and service trade school, where they taught things like culinary, restaurant service. All of the classes I taught for that school were centered around things like food and drinks, holidays and traditions, nutrition, and service dialogues. The other high school I taught at was a technical and professional high school, where they have programs for Biotechnology, Health, and Social Science. I got to talk a lot about things I was passionate about like U.S. healthcare, our education system, civil rights, nutrition, designing experiments, ethics, biotechnology, and general American culture and traditions.

I incorporated a lot of things they were interested in learning about. I would do different kinds of presentations and activities about American culture. I helped them prepare for their oral presentations and would give them feedback.

Did you get to decide that or was there a guideline from TAPIF?

When you’re filling out your application, you get to check off a few boxes about your background. I majored in biology and I did bench and clinical research, so that’s what I included in my application.

I think TAPIF also tries to decide your placement based on your hobbies. For example, I put on my application that I really enjoy cooking so they placed me in a school with a culinary program. For the most part, they put you where they think you’d fit in best and what high school you are able to give the most to.

What was your favorite memory as a teaching assistant?

I really liked getting to know all of my students and seeing their growth from when I first began teaching to the end. I remember when I first met them, they were so shy and scared to speak to me. By the end of the program, they were so excited to speak in class and we were able to have a lot of fun conversations together.

I loved being able to actually talk to them about what they’re interested in and seeing them build their confidence in being able to speak English. I had them pick what topics they’d be interested in learning. I really liked that because they also had a lot to teach me in return, through our discussions. I would always ask them about things like what kind of music, shows, food, stores, and activities they like. It was like an inside scoop to their culture.

How did Rowan’s French program help prepare you for this experience?

I loved how small Rowan’s French program was. I had a lot more opportunities to practice speaking with the students in my class because there were only five or six students. There’s also more one-on-one help from your professors.

The support I got from the faculty was huge. I wouldn’t have gotten the position if it wasn’t for Dr. Hernandez. She encouraged me to pursue the French minor and apply to the program. In the beginning, I was debating on whether or not I should go to France because I am also applying to medical school. Dr. Hernandez walked me through the pros and cons of going to France in the midst of a pandemic. Eventually, I made my decision to go based on the idea that I’ll never get to experience and learn about France the way I did in those seven months. It truly would’ve been an opportunity of a lifetime. 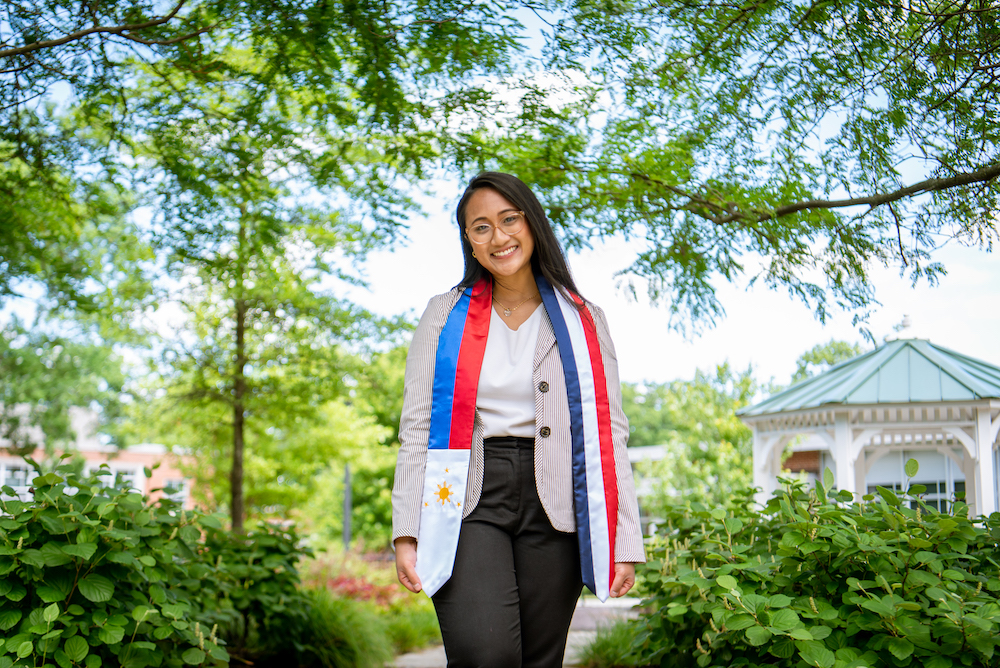 In the end, I was honestly so thankful that I went this year. Even though everything was closed the entire time I was there, I don’t think I would have built such a strong bond with all the other assistants if everything was open. We would have each been doing our own thing. Being able to experience big cities like Paris with fewer people on the streets was also really cool.