Rowan University’s Rohrer College of Business offers an MBA/MS in Finance accelerated program that grants two graduate degrees in less time at a lower cost. That pathway appealed to Kristin Carlson, whose time is limited with raising and homeschooling four children. It may also place her closer to her own long-term career goals. Read on for her story.

As early as she can recall, people in Kristin Carlson’s orbit kept telling her she would own her own business one day. One of her first ventures — in preschool — was today’s equivalent of a pint-sized pop-up shop, where she would make and sell products to her friends.

Several years later, with an undergraduate degree in business and the encouragement of many teachers and family members to get an MBA, Kristin enrolled at Rowan University’s Rohrer College of Business to continue her education.

Kristin entered the Rowan MBA program with future entrepreneurial aspirations, account management experience in the security industry and a deep interest in learning more about corporate finance. Torn between enrolling in Rowan’s MBA or M.S in Finance (MSF) programs, she ultimately chose the MBA with a finance concentration to gain exposure to both.

The Rohrer College of Business then launched an accelerated MBA/MSF program, where students can pursue both graduate degrees concurrently by sharing up to five classes (up to 15 credits) between the two programs. Kristin no longer had to choose but could complete two business degrees, at a significant tuition savings. 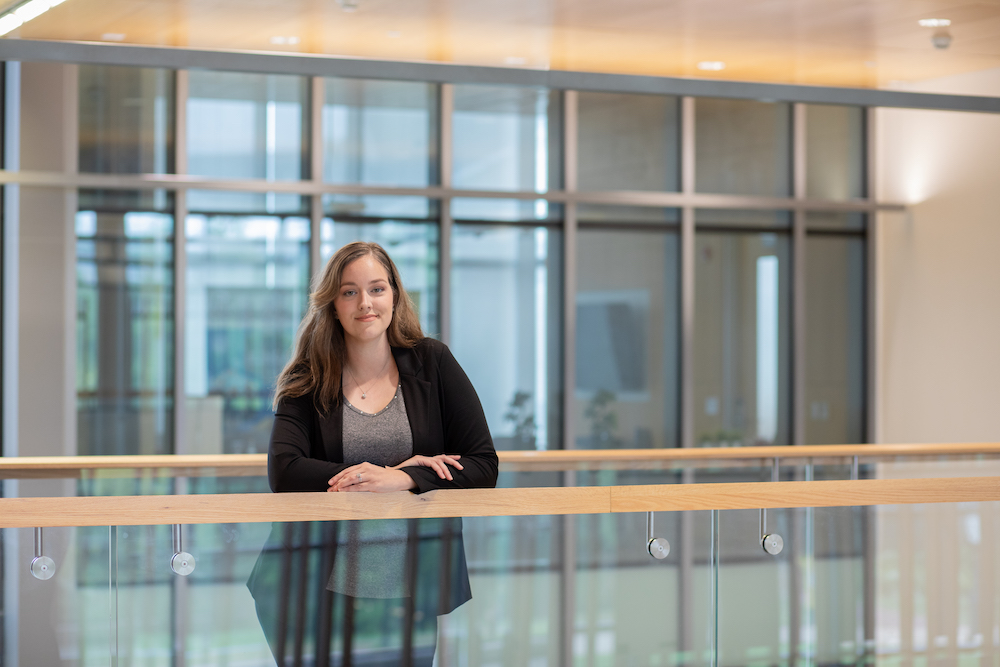 “I saw that there was the accelerated program, and that it really, I think it added two semesters — I had to take a summer class this semester, and then I’ll have to take the fall semester to finish the MSF — but it just added two semesters on and not much more money. So I thought it made sense to just [finish] both at the same time,” Kristin says.

Having entered Rowan part-time, Kristin’s courseload has quite literally accelerated since starting the combined MBA/MSF program. With coursework progressing at double the pace, she says more of the quantitative, advanced finance classes can be challenging to make sure she’s absorbing all the material.

Overall, though, she welcomes the faster pace and the organization of the joint program.

“I like being able to work through [the courses] a little quicker,” Kristin says. “In one semester, if I take four classes, I end up with two in module one and two in module two instead of four all at the same time. So even though they’re kind of double pace, in those periods, it might be a little easier to focus because you’re more focused on just one class at a time instead of two or three classes overlapping at the same time.”

Another aspect Kristin can modify to fit her needs is the program’s course delivery, which she chooses to pursue online. Kristin organizes her classes, homework and studying around a full school schedule at home, where she educates her four children and participates in a local homeschool association in which she also teaches. She says the flexibility of being online means she can adjust and timeblock her moments from week to week, especially for larger upcoming assignments.

“I’m able to wake up early and do my work if I need to, or stay up late and do it or work on it for two days. If I need to go here and there, it’s very convenient. So I can schedule everything I have to do around it,” Kristin explains.

She’s also applying graduate school content to her homeschool curriculum, where she built an entrepreneurial assignment centered around a lemonade stand for younger students and taught a personal finance and budgeting skills class to teens.

With her active schedule lessened somewhat when she graduates with two business degrees this fall, Kristin sees herself in a corporate finance role, noting she is “interested in the financial planning and analysis side of things.” In the back of her mind, however, Kristin has a few business ideas percolating. “I’ve always been drawn to wanting to run my own business or doing my own side entrepreneurial projects,” she says, adding she will “definitely want to pursue” her own business venture down the line.